This interview was originally published in the issue 04 : 2020 of Digital Production.

When Disney releases a DVD, you sometimes get the chance to get an interview slot with the VFX guys. And when “Star Wars – The Rise of Skywalker” came to disc and streaming, we grabbed the chance to talk to VFX Supervisor Roger Guyett.

Guyett has been part of ILM since the mid-nineties – and worked as a super visor on a list of films as long as an arm–- from “Pirates of the Caribbean” to “Cowboys & Aliens”, from “Star Trek” to “Ready Player One”, from “Harry Potter” to “Casper”, from “Mission Impossible” to “Mars Attacks”. Currently, he is putting the finishing touches on “The SpongeBob Movie: Sponge on the Run” (bit.ly/roger_guyett). 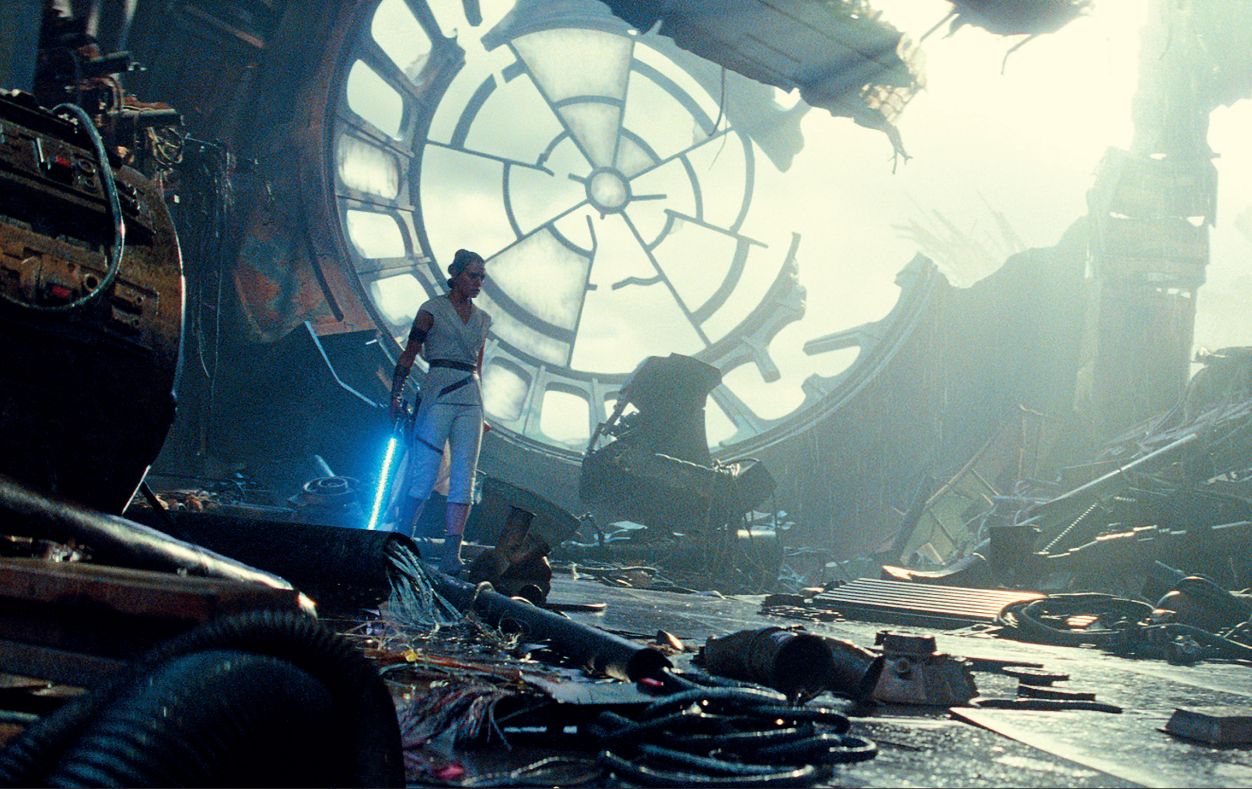 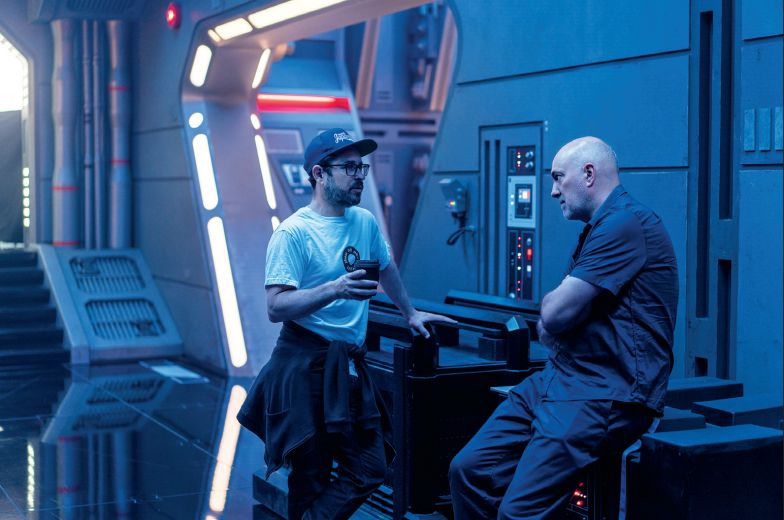 DP: With offices in San Francisco, Sidney, Singapore, London and Vancouver working together, how do you manage to keep it all together? And how did you split up the work and manage the pipeline?

Roger Guyett: For this one we used every ILM office in the world and covered our time zones (laughs). It made it a 24-hour-experience, you know.

Thankfully, our offices have a pretty similar set of capabilities – except Sydney, because it is quite new and not fully integrated yet. But we decided very early not to divide it by tasks – have one handle the roto, one the comp, one the rendering and so forth – but we divided it up by sequence, so for example London did all the Leia work, the speeder chase, and the Palpatine sequences in the third act. San Francisco did the battle in the end with the Galaxy Fleet and the Star Destroyers, Singapore did the water scenes, Vancouver did the other parts of the battle and the ice channel travel.

I think splitting up by sequence is just better – the offices are self-sufficient, and it is more satisfying for the artists to be more involved in one definite part. Also it is easier to handle, because you have Nigel Sumner as supervisor on the water scenes, Jeff Capogreco was the supervisor on the ice tunnels, and Daniele Bigi and a few more. There is so much talent at ILM – it’s a pleasure to work with the different offices, and they can focus on the sequences and not have to be a „cog in the machine“.

DP: How do you handle the communication with such a diverse and widespread team?

Roger Guyett: There are a lot of different video systems – Disney uses BlueJeans (www.bluejeans.com), as well as some Google Tools – but the network is set up to be essentially the same across all the different facilities. Everyone can access the files, so we could just open it up in RV (tweaksoftware.com) and compare the shots and sequences. To be honest, it’s not like being next to the person and pointing to the same screen, but with the globalization of the VFX industries it is the reality of daily work. Even more so now. 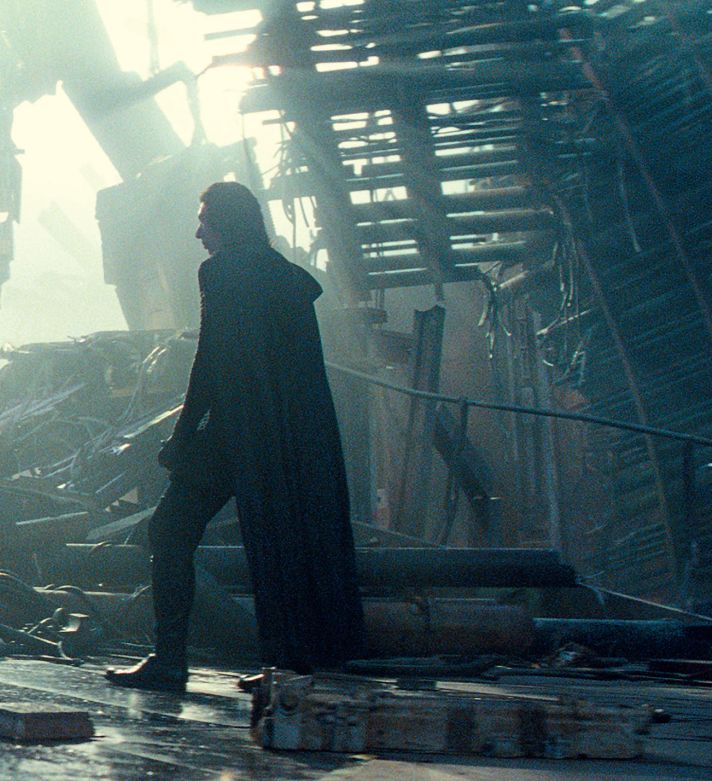 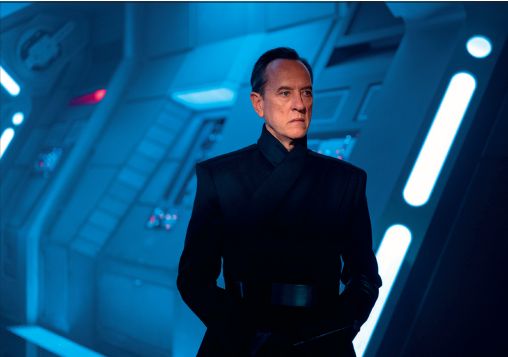 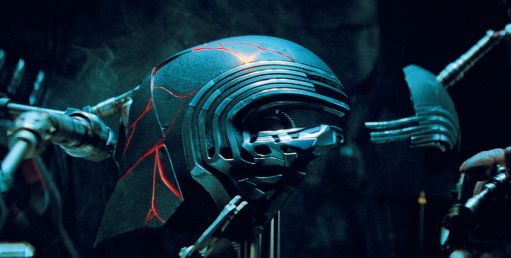 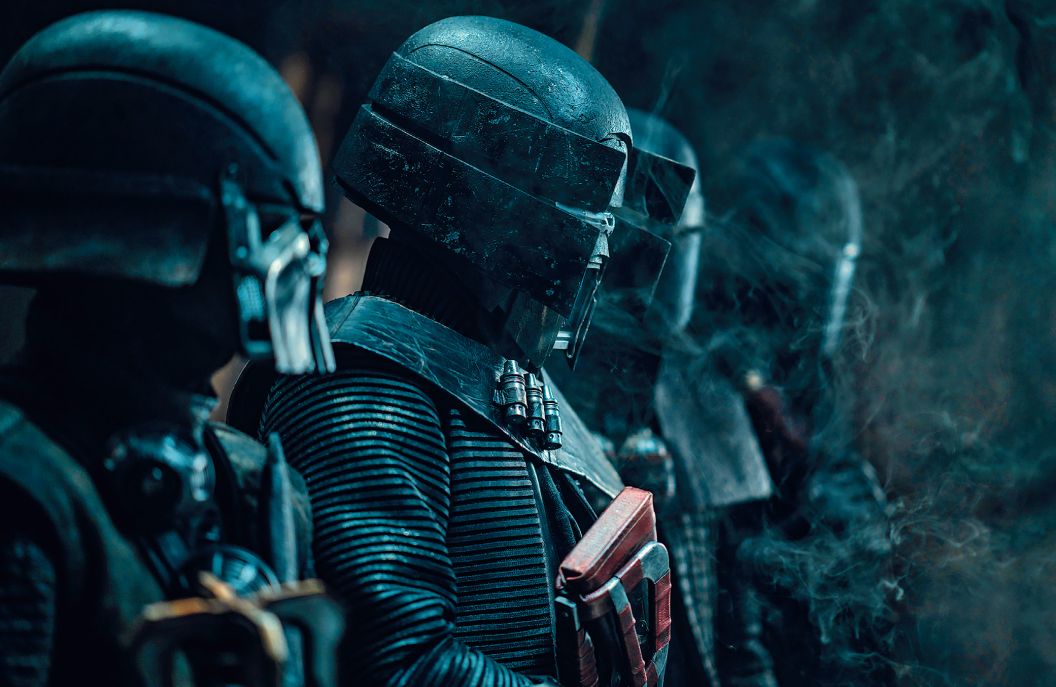 Roger Guyett: Well, in the last 10 or, to be precise, in the last 25 years – there has been an incredible trajectory in the VFX industry – not only in the way it works, but also in the technology that is available to use. Obviously, now we are doing less miniature work. Ironically, on “Star Wars 9” we did some shots with miniatures, but it is getting harder and harder to find people who are to do it. But the modern technologies have been getting incredibly powerful – even down to the computers. And the image quality has become more and more photorealistic, and therefore you have more time on the creative assembly of a shot. But with „Cowboys & Aliens“, it was an absolute pleasure to work with Jon Favreau – who assembled an incredible cast of actors. Doing the Aliens was a lot of fun, and we actually did a lot of complicated work on that – the match for the spaceships landing and taking off going to the ground – actually puncturing the surface and crashing.

DP: Talking about Jon Favreau: While you were doing “Star Wars 9”, he was working on “The Mandalorian”, using the widely publicized Virtual Production Technology. Have you had a look at that setup, and would you consider using it for “Star Wars 12”?

Roger Guyett: Absolutely – the line is so grey between a TV show and a movie. I’d argue these days there isn’t a line at all. Maybe the difference is the budget. (laughs) The technology is a tool – and obviously, if it serves the movie, we would use it. We did similar kinds of things on different movies. Rear projection is obviously what you are doing with virtual production – it is basically a super intelligent rear projection approach. We used rear projection on “Harry Potter”, for example – Rob Legato and I were running imagery on LED screens behind the kids in the railway carriage. We tried to do things like that, and those kinds of ideas really needed for the technology to catch up and make it not cost-prohibitive. The LED panels alone were so expensive. 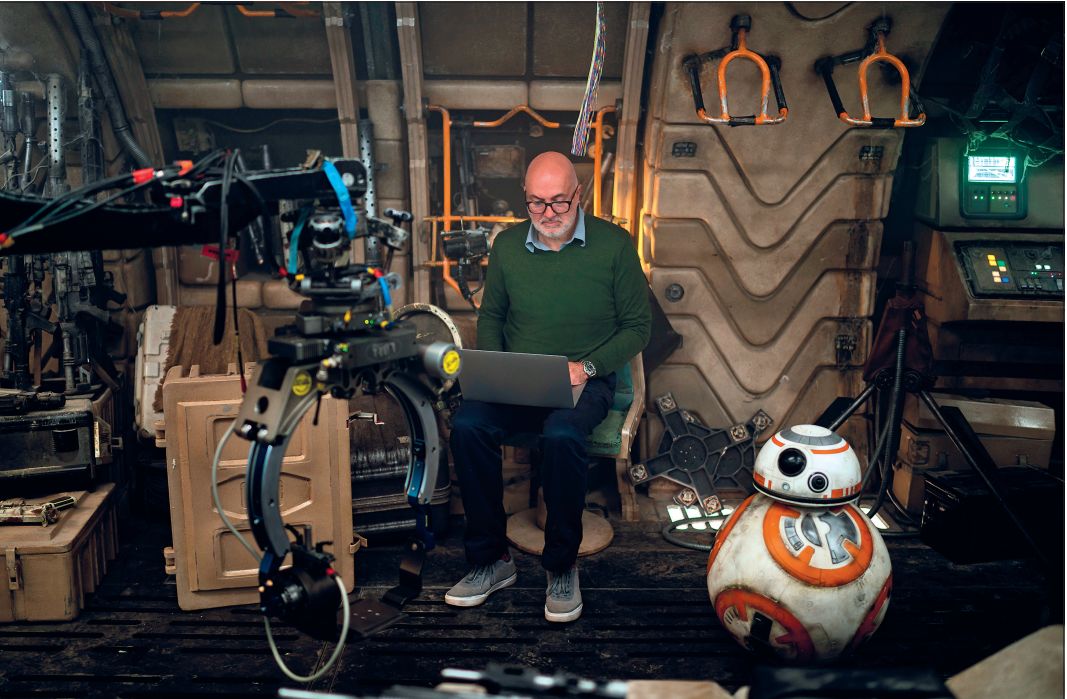 DP: With all those tools – from miniatures to virtual projection, from the forced perspective of the sand crawler on Pasaana to the virtual Carrie Fisher: how This little creature was done with puppetry. do you decide what technology to choose for each sequence?

Roger Guyett: You have all of these tools – but you have to match them to the problem. For example: When you have creatures, it is incredibly helpful to the integrity of the scene to have somebody representing that creature. If you can do a practical version of that creature, it helps the people shooting the scene – because it is right there in front of the camera, and everybody can see the creature, the actor and their interaction.

The issue puppetry has is, that it is not realistic enough in terms of details in the creature, and the practical limitations of how big the motor that drives the eyelids is, for example. Now, these problems we can solve digitally very easily, so I think the collaboration between the departments makes everything more believable. But it is all driven by the design of the creature – can it even be done practically.

Now, I grew up in an era where digital technology was really coming to the forefront – we are fortunate enough to witness and actually use a lot of the older technology. Having that knowledge, you understand how and when you can use a forced perspective on the sandcrawler on Episode 9, which is an old-school approach, but very effective, if done correctly. With the history of “Star Wars”, blowing a planet up in Episode 9 was an obvious hat-tip to the beginning, and going full circle of the movies.

But all these techniques and technologies have their place – it is really about the feel and look and the kind of shot you are looking at.

DP: The giant shot in the end with the Star Destroyer Fleet on one side and the Galaxy Fleet of the rebels on the other side – how did you set up that many ships and their variants?

Roger Guyett: It is obviously a mixture of procedural CGI and animation. The idea of hand-animating ten thousand ships is absolutely impossible – and even building so many ships one by one is not doable.

Paul Kavanagh, the animation supervisor, basically positioned a lot of ships in the front row – the hero ships, so to speak. Procedurally we generated thousands and thousands of those Galaxy Fleet ships. The team then broke apart the hero ships into pieces and generated other ones from these parts, with different finishes, textures and scales. Otherwise we would never have finished those shots. We didn’t have a lot of time on “Star Wars 9”, so we had to use that computing advantage whenever we could. And for the fleet, we generated thousands of ships and simply culled those we didn’t like.

DP: Finally: Which shot of “Star Wars 9” is going to go in your personal showreel?

Roger Guyett: Obviously, on a movie like this there are thousands of shots – and you develop different relationships with them. Some are challenging, some work like a dream from frame one, but in the end I’m just immensely proud of the movie and to have been part of such a talented and amazing team. But my personal favorite shot? Well, there are the star destroyers coming up from the ground, which for me is a beautiful shot. And another one I really loved is the shot were Rey jumps over the tie fighter – that was even in the trailer. Just the composition of the shot, and the simulations and all of that – I loved this one. 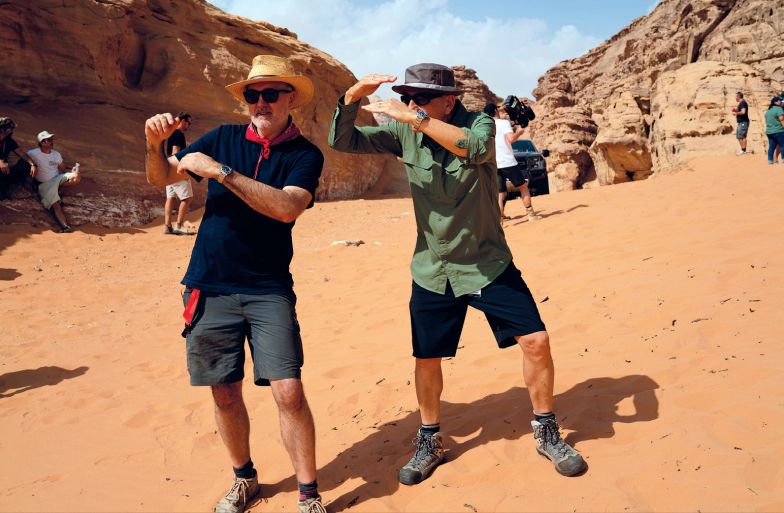 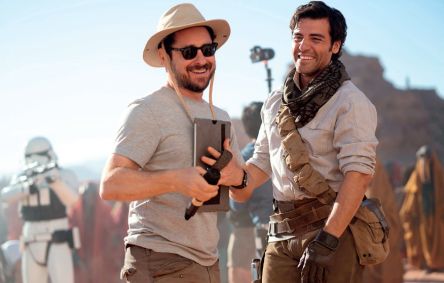 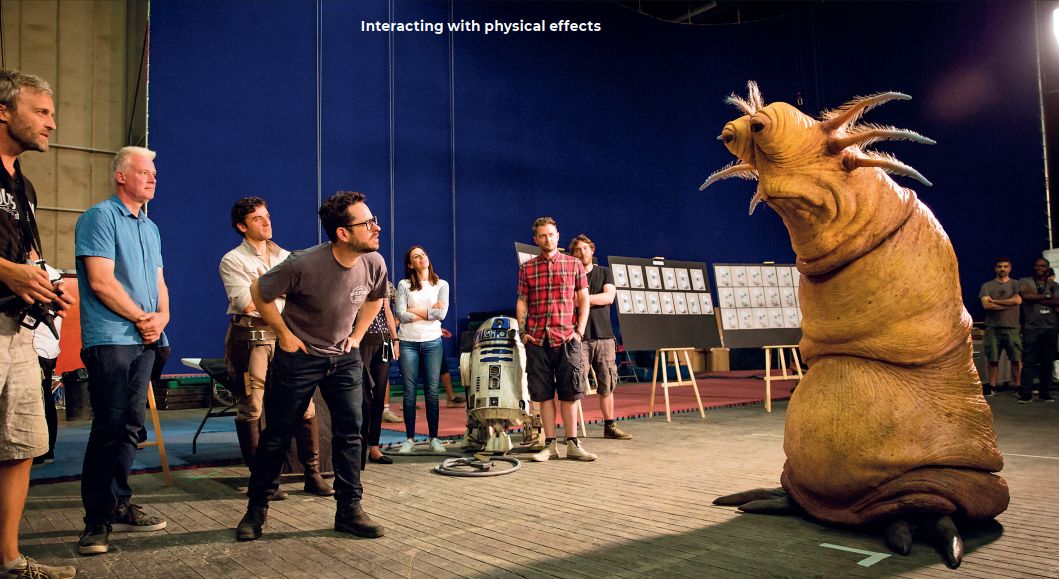 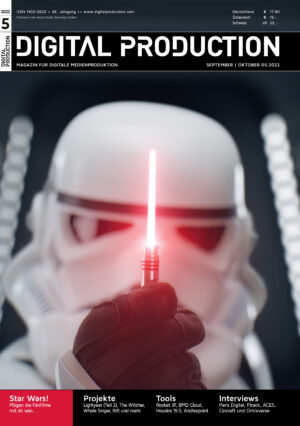